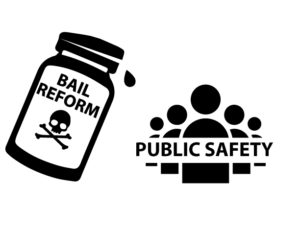 As someone who has been deeply immersed into the bail reform debate for several years, I cannot tell you how much it irks me to hear bail reform advocates talk about “public safety.”  Especially since the truth about bail reform results in the opposite of public safety (i.e. decreased accountability and rising crime rates).  How in the world these social justice advocates have been able to convince our elected officials and the public that the all-out release of defendants accused of a crime into our communities is beneficial to public safety is mind-boggling.  But even more disturbing is when these programs are implemented based on this false narrative, how irresponsible and dangerous they actually are.

The other thing that irks me about the false and misleading narrative of bail reformers is that they not only position what they do as protecting the public, but also position the bail industry as being “unsafe” for the public.  Let me get this straight. They think releasing a defendant on a financially secured bond (which means that you typically tied a family member to the person’s release, holding them financially accountable should the defendant not show up for court) is more dangerous than releasing a defendant on simply their verbal promise to appear in court.

I am not sure what world that these reformers think they live in, but simply relying on a person’s promise and a few text message reminders is not the safest and most effective way to ensure someone’s appearance in court.  And it is definitely not the most effective way to keep the public safe.

I don’t even need to quote a study at this point…it is pretty much common sense that supports this claim.  For example, when I go to the bowling alley, do they just give me a pair of shoes and say please bring them back?  No…they don’t.  Instead, they require me to pay a fee for the shoes and also take my existing shoes as collateral. They do this because they know that if they don’t, they will never see their shoes again.

While public safety is always a consideration by the judge in all pretrial release decisions, it is important to note that it is not the primary goal of the bail agent.  The primary purpose of the agent and financially securing someone’s release is to ensure they show up for court.  It is not to protect the public.  No bail agent should ever claim that the purpose they provide is designed to protect the public. That being said, research has shown that when someone is out on a financially secured bond, not only are they more likely to show up for court, but also, they are more likely to stay out of trouble while out.  We call this the “halo effect” of bail.  When people have money on the line and people they care about are involved with their case and are tied to their bond, they are less likely to re-offend.  But, even with that fact, it is important to remember that public safety is not a promise made by the bail industry.  Public safety is the job of the judge and we always default to their experience, knowledge and judgement.

On the other hand, bail reform advocates aren’t as modest.  They are always banging the public safety drum.  According to their narrative, they claim that their risk assessment tool can determine who is dangerous and who isn’t.  They claim their algorithm can tell if someone who is let out of jail will or will not commit a crime or hurt someone.  Seriously?  Are we supposed to believe that these oracles of bail reform can see the future?  Are we supposed to believe that they have a computerized crystal ball that can make better decisions than an experienced judge can make?  I think not.  If you ask me, this claim of predicting behavior isn’t just an overpromise. It is ridiculous, it is dangerous, and it is catastrophically irresponsible to the community.