Last month a survey was conducted by a media outlet out of Illinois asking consumers if they thought that cash bail should be eliminated. Surprising to some but not to us, consumers voted almost 2 to 1 against the idea of eliminating cash bail for people arrested on misdemeanors or non-violent felonies. What does this tell us? That bail reform is a false movement? No one wants people released from jail for free without having to pay for a bail bond. Plain and simple. So why do our elected officials push the bail reform agenda forward? That is a great question and one that needs to be answered. Forward the results of this poll to your local elected officials and let them know that you community is against eliminating our constitutional right to bail.

Here is a link to the poll. 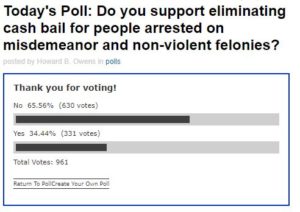