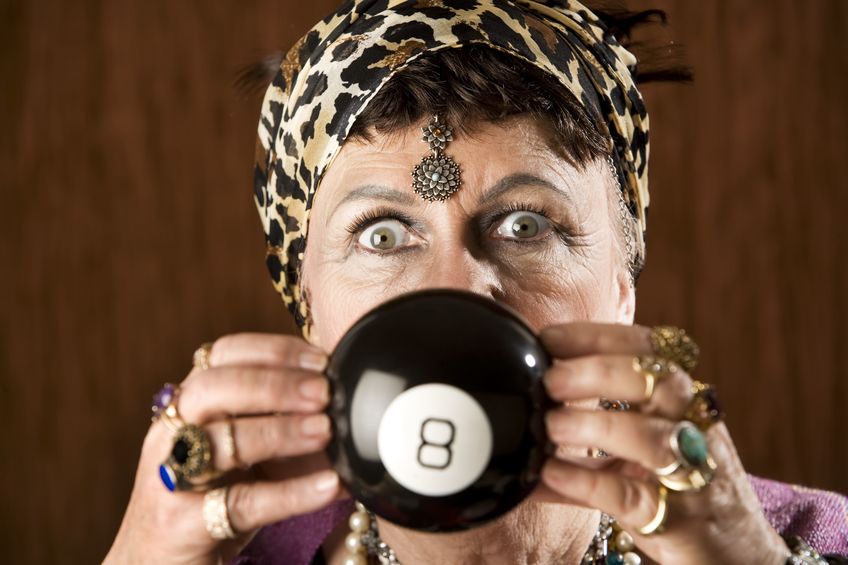 Last week, California’s Judicial Council agreed to pay $70 million for the world’s largest Magic 8 Ball. We aren’t sure of the actual dimensions of the giant 1970’s popular prognosticating pool ball, but we are told it is going to solve all the problems in our criminal justice system. According to the inventors of this magical device, its operation is simple. First, someone gets arrested. Second, a pretrial services employee asks the defendant…wait, I mean, justice involved individual…whether they are innocent or guilty. Then, they pick up the Magic 8 ball, ask it, will this justice involved individual re-offend, and then they shake it. If the result is a “yes”, “outlook is good” or “you may rely on it” then the pretrial employee moves on to the next question of whether the person plans on returning to court. If the result is a “no”, “don’t count on it” or “outlook not so good” then the justice involved individual’s risk score will be higher. High risk individuals must compete a series of follow up questions with the Magic 8 ball to determine the level of supervision they will need, because the reality is that in this game of chance, everyone eventually gets released…regardless of the score. In the rare instance that the result of this first question comes back with an “ask again later” response, then the justice involved individual will sit in custody until the pretrial services employee brings the Magic 8 ball out again for a redo.

Once all the justice involved individuals have been screened by the magical plastic orb, they will be categorized into low, medium and high risk. Low and medium risks will be released simply on their promise to appear in court. The court may decide to throw in a complimentary ankle monitor and maybe even a free Uber ride, but for the most part, the justice involved individual will be free to go until their court date or next involvement with the justice system. Shockingly, the Magic 8 ball does have its limitations. After a couple years of shaking, the answers provided by the device will become harder to see through the little circular window. At this point, the Magic 8 ball will have to be recalibrated and validated. This process is actually pretty simple. You just throw the old one out and get a new one off the shelf and remove the packaging.

What does this mean to Californians? I think it is a pretty good sign that it is time to run for the hills. Just when you thought a state couldn’t get more lenient on criminals, California manages to continue to shock us. First there was the emptying of the prisons and the filling of the jails with hard core justice involved individuals with AB109. Then there was the “its okay to be a criminal act”, Proposition 47. This ingenious piece of legislation promising “Safe neighborhoods and schools” made everyday felonies acceptable. No longer would drug dealers and violent career criminals need to worry, because the unacceptable criminal behavior they exhibited yesterday, was now acceptable today. No longer would they be charged with a felony. Now they would instead get a wrist slap, an apology from the community for not being good enough to them and a misdemeanor charge. This way, they would be able to easily integrate back into a productive life of crime with fewer interruptions from those pesky law enforcement officers.

Okay, all kidding aside, hopefully you can tell by now that there really isn’t a giant Magic 8 ball being used in California’s criminal justice system. There isn’t even a large cabinet with hundreds of smaller Magic 8 Balls sitting in California’s halls of justice. That would just be stupid, right? Why in the world would a state with the fifth largest economy in the world use a children’s toy to make public safety decisions? Why in the world would a state that boasts about its diversity and culture rely on something as simple as a floating triangular dice roll to ensure racial and socioeconomic equality in our criminal justice system? As much as I would like to say with confidence that they would never do those things, I can’t. As ludicrous as these question sound, that is exactly what California is doing.

Last week, I attended a meeting of Los Angeles County officials regarding LA’s share of the $70 million…a whopping $17.3 million. Their plan? To implement pilot programs that utilize risk assessments to determine the fate of all those justice involved individuals. The problem is that the risk assessments they plan on using have been under quite a bit of scrutiny lately. Not just by surety representatives with a quick wit and keen sense of comedy like myself, but by leading academics and researchers.

Over the past twelve months, 100 civil rights organizations (including the NAACP and ACLU), 80 technology companies (including Google, Facebook and Amazon) and 27 of the leading researchers across the country have all come out publicly against the use of risk assessments in the criminal justice system. They compared their effectiveness to that of a…yep you guessed it…Magic 8 ball. During public comments, I was lucky enough to get 2 minutes to inform these super concerned, public safety conscious, public servants about the potential issues with their proposed pretrial programs… the ones they were salivating to spend $17.3 million taxpayer dollars on. I mentioned racial bias. I mentioned socioeconomic inequities. I mentioned victims’ rights. I mentioned ineffectiveness. I also mentioned the Magic 8 Ball (btw, no one laughed). I went through all the reasons that the top professionals in the area of risk assessments identified as reasons to not implement them. And the result…crickets. No comments. No questions. No counter arguments. Just a simple, thank you Mr. Granof, your time is up.”

First of all, where does this leave us? I mean we all just can’t pack up and leave, can we? To be honest, after some careful thought, I think it leaves us in better shape than most might think. These pretrial advocates are going to implement a system that is 100% going to fail. There is more than enough evidence that supports that statement.

Secondly, I am confident that the voters in California are going to vote down SB10 in November 2020. Based on the results of consumer polls and focus groups, Californians do not want to give up their right to bail.

Lastly, when it comes to criminal justice and public safety, the public will only take so much, and this program is going to exceed that amount. What can we do? I believe it is the job of every bail agent in the state to educate their friends and family and empower them to educate others. Every agent must get engaged in this conflict in some way. It is not going to be easy, but we must have the confidence to withstand whatever they throw at us, because we know the truth is on our side. And even when their solutions are as ridiculous and ineffective as a child’s toy, we must have the sense of humor to laugh it off and move forward. Ultimately, I believe we will win…just shake the Magic 8 ball and see…All signs Point to Yes!