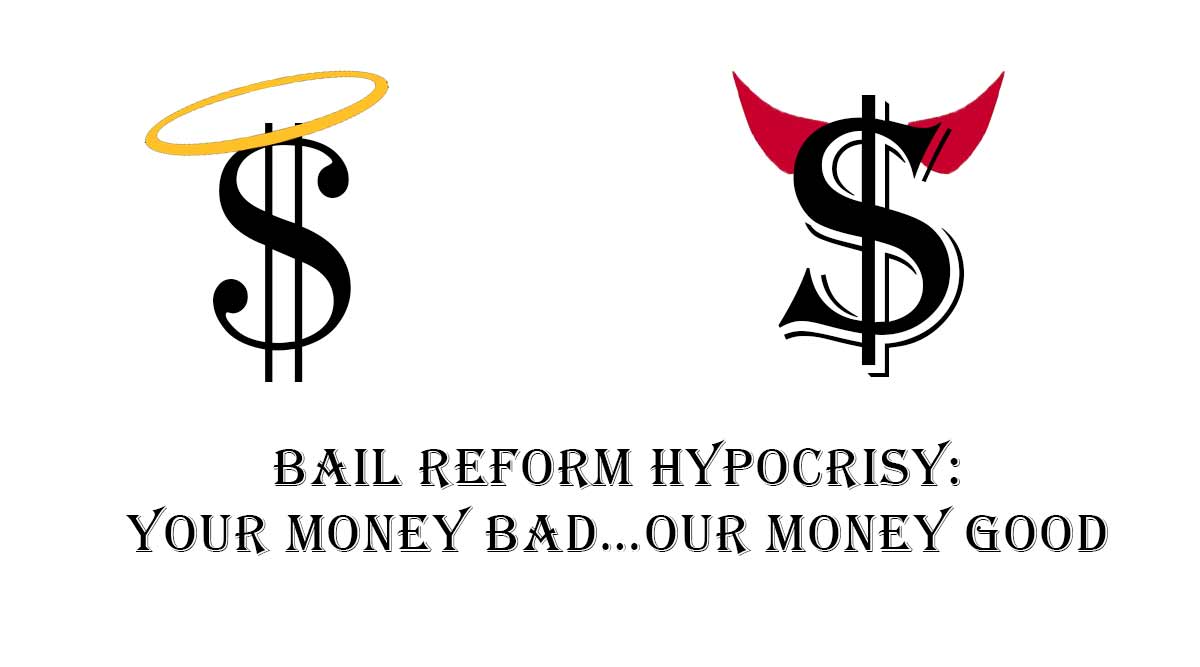 If you have been following the bail reform movement, you know its proponents hate “money bail” more than anything. They call it unfair. They call it ineffective. They call it socially and economically unjust. They call it racist. That being said, it is pretty ironic that a group of people who hate the concept of money have more money on their side than one could ever imagine. And I am not talking about thousands of dollars of government grants. I am talking billions of dollars from private individuals who are not secretive at all about their goal, which is simply, to eliminate private industry from the criminal justice system.

Let’s look at just one player in this criminal justice debate….and just for the record, I would have looked at George Soros in this analysis, but I don’t really feel like digging that deep and then dealing with all the conspiracy theorist talk and insults. So instead, we will highlight the most visible and largest proponent of bail reform, the one group who is not shy about their ultimate agenda, The Laura and John Arnold Foundation.

While this group continues to support and perpetuate the evils of “money” in the criminal justice system, specifically the pretrial process, they continue to spend and dole out tens of millions of dollars to market and promote their own pretrial solution, the magical Public Safety Assessment tool (PSA). Over the past several years, the Arnold PSA has been at the center of the bail reform movement. This magical black box algorithm is not only given away for free to counties, but it is capable of…hold on to your hats…predicting the future. Yep, the folks over at the Arnold Foundation have figured out a way to predict human behavior. I think they also sell a tonic of some kind that can grow hair, but I’ll leave that one for another blog. Let’s instead focus on this amazing Arnold oracle and the multi-million-dollar marketing and promotional campaign it has been pushing for the past couple years.

So, let’s think about the strategy here…and let’s start with the narrative. If you wanted to replace the existing bail system, how would you do it? First, you’d want to show it doesn’t work. They tried that, but the problem is it does work. Second, you’d want to show it costs too much. They tried that too, but the problem is the private sector bail industry doesn’t cost counties any money…in fact, it actually generates revenue for most of them. Okay, strike two. Third, the only real strategy left, claim the bail system is “UNFAIR.” Claim it creates an injustice of some kind…call it social injustice…people love those types of causes. I mean come on…no one likes things that are unfair. Bingo, there is your narrative. “Bail is unfair. Bail is morally wrong. Bail is unjust.”

Now that you have a narrative, how do you go about spreading it, especially since all the data that has been collected on pretrial over the past 25 years shows bail is the most effective way to ensure appearance? Well, first you need to buy yourself some studies. These studies should show how great your solution is…your risk assessment tool…and how it eliminates those things that are unfair and morally wrong…i.e. “Money bail.” Then you need to buy yourself some positive media coverage that will perpetuate your narrative and tout your studies. That is the easy part because you know how much the media loves a good social justice cause. Now you need to buy a ground game. You need some troops to spread your message on the street. Groups that have infrastructure and rabid followers willing to travel near and far to generate petitions and surveys and spread your narrative and propaganda. And last, but not least, you need to buy yourself some generals to lead the troops…influencers, people of power to champion your cause. Once you have all those things, you are in business. This is how you start a movement. This is how you create a following and gain traction. People aren’t just going to follow you because they like you. People need to get PAID. Advocacy groups need donations. Media groups need to be incentivized. Universities and researchers need to be funded. Community leaders and politicians need contributions. Yes, it is an old cliché, but no matter where you are from or what you do, “money does make the world go around” …especially the world of social causes. And the Arnold Foundation has plenty of money to go around with.

Over the past 12 months, the Arnold Foundation has been going arounda big time. They have donated money to just about anyone and everyone including advocacy groups, media outlets, universities, politicians, and the list goes on. Here is just a sampling of the influence and support that the Arnold Foundation has created (a complete list is located here…http://www.arnoldfoundation.org/grants/) …

As you can see, this list includes the “who is who” of the anti-bail movement and the magical PSA supporters. Each and every one of the groups mentioned above has come out against the use of money in the bail system. Could this be just a coincidence? Sure. Nothing is impossible. But is it really probable? Probably not. Just think about it…if you had enough money to donate to a well-respected University, and that University conducted a study that not only denounced the current system in place (money-bail for example) but recommended your system (the PSA for example) as the best replacement. Wouldn’t that be great? I mean think about it, who would argue with a research study from one of the most respected Universities in the country that says, money bail is unfair. That seems like research well worth the price.

Through the abundance of charitable giving The Arnold Foundation has done over the past few years, you can see their strategy unfolding. They are systematically building a narrative that will eventually place their “trojan horse” risk assessment into the criminal justice system. And the best part is that they are doing it for FREE. They promise fairness and justice for the accused. They promise equality for the socio economically depressed. And they are going to deliver it all at the low, low cost of zero. All they want in return for this magical PSA tool they are giving counties out of the goodness of their heart is the data. The data? Why do they want the data? Has anyone asked themselves that? Do we really want a private sector non-profit to have that much personal data on people that are in the criminal justice system? What are they going to do with it? Also, why do they make counties sign an agreement they cannot talk or disclose anything about? Why do the tell the counties that if they use the tool that they must agree that judges will go with the recommendations of the tool 70-80% of the time? Does that sound like just another tool to help judges or a tool designed to direct and replace judges? So much for judicial discretion. There are so many questions that our elected officials and judiciary should be asking about this whole deal that it is mindboggling. Why aren’t they?

Who is the Arnold Foundation? How do they benefit from giving the tool away? How legitimate is their research? How legitimate is their support? Controlling the release and detention of human beings is a powerful position to be in. Do we really want to relinquish that power to a non-profit foundation that can pay billions for support and influence? Before we demonize and eliminate the bail industry, we need to understand what is at stake here. Eliminating personal liberties and the right to bail from defendants and families and replacing it with an unproven, ineffective and potentially racially biased computer algorithm is a very dangerous proposition. The public needs to stand up and start asking questions. Our leaders need to start demanding the facts and the truth.

We have all heard the phrase “money makes the world go around,” well that is especially true with the Arnold Foundation. They have the money to not only buy research, support and influence, but also, and this is the scary part, take away the freedom and liberties of each one of us. When someone stands on the mountain and cries wolf, you need to make sure they are the ones who aren’t actually the wolf.

So the next time you hear the phrase “the use of money in the bail system is bad,” just remember who has the money and who is using it. The Arnold Foundation has lots of money. They pay a large percentage of their employees well over six figures and they donate hundreds of millions to support their own cause. All the while they point the finger at the bail industry and yell “Money Bail” is bad. It is both hypocritical and ironic that the “money” they are advocating against in the money bail system…is the same money they are so strategically using to promote their own criminal justice solution. You really must begin to wonder what is really going on here. You really must hope people will wake up soon and begin to question the tactics and motives of this group before it is too late.