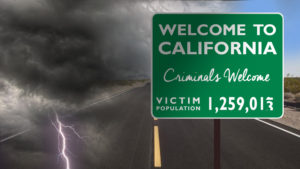 August 20, 2018 will in my memory be forever known as the most dangerous day in America. And the amazing thing about that is that 99.9% of people in this country have no idea why. On this day, in California, our elected officials in the California Assembly made one of the most irresponsible and ill-informed decisions they have ever made. They passed Senate Bill 10 (the bill was also passed by the Senate 2 days later and is now on the Governor’s desk waiting to be signed). Now most people reading this will probably be saying, “well geez…it is California, what else do you expect?” And for the most part, I agree with that sentiment. But to have a knowledgeable and honest discussion about this, you have to look at the last 5 years and see the long list of dangerous and misguided laws that have been coerced out of and forced down the throats of Californians.

First was AB109. This insightful bill (said with extreme sarcasm) was passed by our legislature to help reduce crowding in our prisons. On the surface, you might say, well how can that be bad. Having less people in prison is a good thing, right? My answer to the is yes, in theory, less people in prison is always a good thing…as long as that means that less people are committing crimes. Unfortunately, that wasn’t the goal of AB109. It wasn’t about reducing crime, it was instead about a giant reshuffling of the people who commit crime. It moved thousands of hardcore, convicted criminals and placed them in the county jails. Why is that bad, especially if the bad guys are still behind bars? Well, what this giant reshuffling did was just move the problem of crowded cells from the prisons to the jails. It also triggered the release of all the criminals that there were serving time in local jails to make room for those coming from prisons. In other words, it released people who otherwise would be in jail, into our communities. By the way, this was all done according to our elected officials, in the name of public safety.

Next came Proposition 47, the “Safe Neighborhoods and Schools” Act. AB109 took care of the current jail and prison populations, prop 47 was designed to take care of future jail populations. If there is no more room in the jails (which are primarily designed to house pretrial detainees in the first place and not convicted criminals) than you need to find a way to reduce the flow of new criminals into the jails. Viola, the birth of prop 47. Another misguided and dangerous piece of legislation, this toxic trojan horse wasn’t passed by our legislature, but rather sent to the public as a proposition. Ultimately, it was passed by an unsuspecting California voter. With a name like the Safe Neighborhoods and Schools act, who wouldn’t vote for it, right? Unfortunately, this was the case. Everyone voted for it…and no one really knew what it would mean. Proposition 47 simply put, made it easier to be a criminal in California. It decriminalized a lost list of felonies and lowered them to low level misdemeanors. No longer would selling drugs put you in jail, it would only get you a slap on the wrist and a summons for court. No longer would stealing something get you put in jail, if it was under $950, it would only get you a stern talking to (if that) and a court summons. No longer would possession of Rohypnol (ruffies or date rape drugs) get you thrown in jail, it would only get you strong look of disappointment and a court summons. Get where we are going with this? I hope so. And oh yeah, it was all done in the name of public safety.

With CA jails busting at the seams with bad guys who are not eligible for release (i.e. no bail), and California’s communities filled with unaccountable reoffending criminals, there was only one more population that our elected officials needed to focus on, the convicted population. Now that the jails were no longer filled with pretrial detainees and instead filled with convicted criminals, we needed a way to free up some space there. The solution, Proposition 57. Much like 47, prop 57 was the latest bit of snake oil sold to the unsuspecting and misinformed California public. Prop 57 decriminalized the crimes of existing sentences. It allowed California to release individuals who have already been convicted of a crime, by reducing that crime from a felony to a misdemeanor. In other words, it basically told criminals that the crime they committed is no longer considered a crime anymore, so they are free to go. That sounds harmless right? Well it is, until of course you read the list of crimes that are no longer felonies under proposition 57. This list includes crimes like Human trafficking involving a sex act with minors, the rape of an unconscious person, assault with a deadly weapon and drive by shootings to name a few. Once again, all done in the name of public safety according to our politicians.

By now you are probably thinking, how in the world is the 20th of August 2018 the most dangerous day when all of these ridiculous and nonsensical laws have passed. Well…let me introduce you to Senate Bill 10. Since it really doesn’t have a catchy name yet, we will call it the bill that killed public safety. SB10, like prop 47 focuses on future criminals…you know, crimes that will be committed in the future. But with SB10, the crimes won’t really be a crime because everyone will be released from jail for FREE on simply a promise to appear. No longer will judges, lawyers and the system determine the fate of those accused of crimes. Instead, a computer algorithm will magically determine a person’s risk level (How? We don’t know because that is proprietary) and based on that risk level they will be released for free on a simple promise to appear. Much like New Jersey and New Mexico who release everyone from hard core drug dealers and gang bangers to child molesters and domestic abusers, California will follow in their footsteps. The difference is that California will release accused criminals at a level that this state and country has never seen before. If you thought a summer weekend in Chicago was bad, wait for the post SB10 apocalypse California. It will no longer be the sunshine state, but rather the crime state. But don’t worry, eventually, once crime reaches unfathomable levels it will get better…it has to. Why? Because SB10 also has a preventative detention measure in it. That means that eventually after all the so called “good people caught up in the system” are released over and over again, the system will shut down on them. That means that eventually, they will be detained with no chance of release (which btw, is antithetical to the California Constitution). That is what happens in the federal system where over 70% of people are detained with no chance of release.

So in essence, SB10 is the worst of the worst. Not only does it easily and haphazardly release dangerous criminals into our communities for free with no accountability, it also has the ability to hold individuals in custody with no chance of release. It literally could be the worst piece of legislation ever written. Once again, all in the name of public safety.

How much more of this will Californians take? The rest of the country is watching us and instead of leading we are floundering. Instead of setting the example for law and order and accountability we are becoming a haven for criminals and the laughing stock of our nation’s criminal justice system. It is now up to us…the public to put our foot down and say NO MORE. It is up to us to look in the mirror and say how are you going to help correct this wrong before it is too late. So yes, in my opinion, August 20th was the most dangerous day ever in America. SB10 passing the Assembly was the first step to this bad legislation becoming law. August 20th was a day where public interest lost, and corrupt political self-interests won. August 20th was a day where victims were abandoned, and criminals were championed. And once again, all this was done under the false promise of public safety.