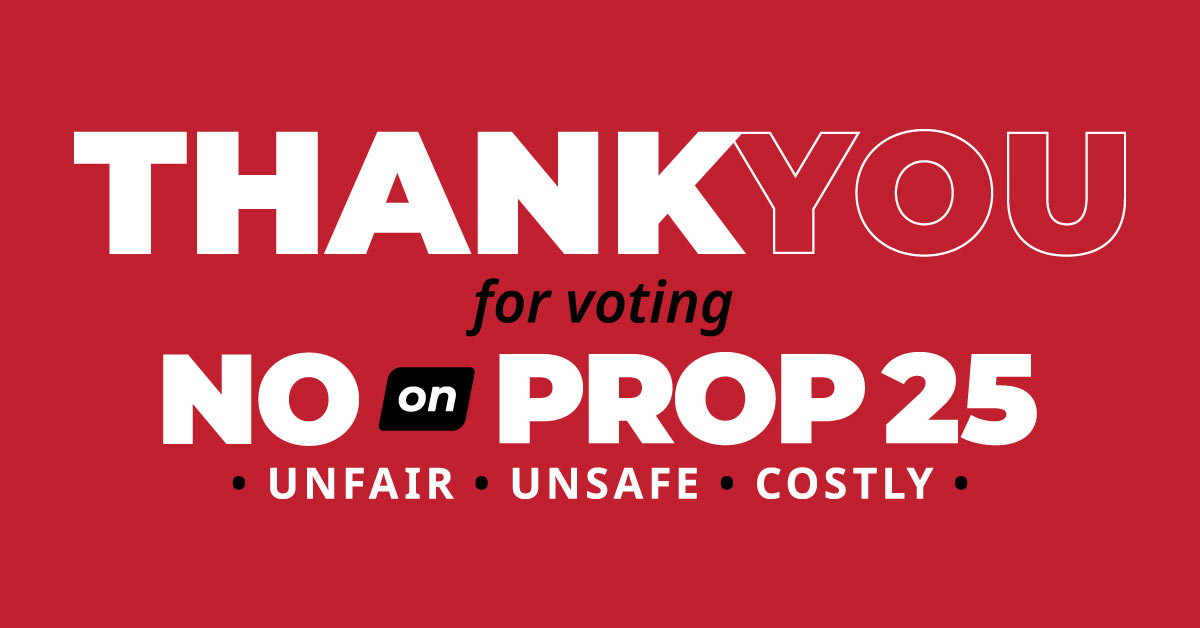 For those of us in the bail industry, last week was one giant emotional rollercoaster.  It began with fear, uncertainty and a little panic and ended with relief, happiness, and exhaustion.  While the votes on Proposition 25 are still being tabulated the result could not be more certain, Californians DO NOT WANT TO ELIMINATE CASH BAIL.  As of this afternoon the vote tally stood at 44.2% (6,062,160) YES to 55.8% (7,656,100) NO.  That is not just a victory, that is an old fashion butt kicking, period.  However, before the vote counting was even over and before the victory confetti could even hit the ground, the proponents of Proposition 25 were already creating a myriad of excuses why the proposition failed, and just for the record, none of the reasons are that it was a bad piece of legislation.

Reason #1 – Consumers were not aware of the proposition.  This is an interesting argument to make especially since the proponent’s campaign (the “Yes” side) outspent the opponent’s campaign (the “No” side) more than 2 to 1.  During the final week of the campaign, almost every other commercial was a Yes on 25 commercial.  In fact, we received many reports that people were seeing multiple Yes ads back to back on network television.  The Yes side even advertised during the World Series, which means that millions of Los Angeles Dodgers fans (Los Angeles voters) were exposed to the Proposition.  Pre-election polling just four days out showed that over 60% of Californians had seen, read, or heard about the proposition. I think we can say with pretty good accuracy that Proposition 25 did not fail because of a lack of awareness.

Reason #2 – Consumers were confused by the bail industry and they did not understand the proposition.  Once again, an almost laughable argument.  The purpose of Proposition 25 could not have been clearer.  The title of the Proposition was “REFERENDUM ON LAW THAT REPLACED MONEY BAIL WITH SYSTEM BASED ON PUBLIC SAFETY AND FLIGHT RISK.”  That is hardly a confusing title from the perspective of the “you should vote yes” side.  Additionally, the California Secretary of State (not someone I would call a friend of bail) wrote the ballot title and description.  In other words, they got to name it and they got to explain it.   To say that the bail industry had some influence or power of persuasion over the composition of the ballot title and description is flat out false and ridiculous.  As usual, the deck was stacked against us.

Reason #3 – Consumers got ballot fatigue by the time they got to Proposition 25.  Really? Ballot fatigue?  That is what they decided to go with?  I do not think that voters get ballot fatigue.  If you believe that people really care about the issues that they are voting for, than how can you ever assume that people would stop caring by the time they voted on the 10th measure on the ballot.  If anything, this comment is less an excuse and more an insult to voters.  Californians care about public safety and they care about a fair criminal justice system.  Proposition 25 provided neither of those, no matter how “fatigued” voters were by the time they got to it.

The reasons for the failing of proposition 25 just keep piling up, yet not once has anyone who supported the proposition said, “Maybe we got it wrong.”  “Maybe we need to re-think bail reform, because it is obvious that Senate Bill 10 was not the solution because the public is saying they want the money bail option.”  No…instead, all we have heard is that Proposition failed for every other reason under the sun except the most obvious one…it was bad policy.

The way our representative government is supposed to work is that the people elect representatives to state legislatures that are supposed to represent the will of the people.  Pretty simple, right?  But unfortunately, it seems like some of our elected representatives have lost their way in that purpose.  No longer are they representing the people, but rather instead they are representing their own interests and focusing on their own objectives.  Eliminating the public’s constitutional right to bail has never been a mandate from the public.  In fact, the overwhelming results from last week’s election should show our elected officials that the actual mandate from the public is the complete opposite.  The public absolutely wants its right to bail.  It does not want to replace that right with a questionable computer algorithm and an unaccountable system of wholesale release and detention.

The big question that remains is will our elected officials accept that reality and move on, or will they continue to turn their backs on the will of their constituency and push for legislation that the public rejects?  Only time will tell, but either way, I can tell you that our company will continue to defend the bail industry and we promise that we will be there to fight every step of the way for the livelihoods of our agents and to defend the public’s constitutional right to bail.