One thing that you will not hear public sector pretrial advocates discuss is what the public thinks of bail reform. Because no matter how much they believe that there is a need to abolish commercial bail and reform the so called “injustice” of requiring criminal defendants to financially secure their release, one thing remains true…the public doesn’t agree.

In a recent survey conducted among Texas residents, we asked 7 different questions about the criminal justice system and the bail reform movement. The responses we received were not only surprising to even us, but diametrically opposed to the narrative being perpetuated by those advocating for more FREE releases from jail. When the public was simply asked, should a defendant be released from jail for free or should they be required to financially secure their release with a bail bond, they overwhelmingly responded in favor of defendant paying for their own release with a bail bond. In fact 88% of respondents supported this concept with only 12% favoring free release. 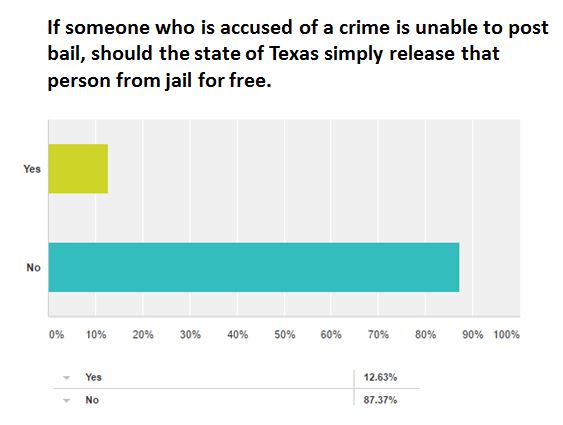 Another key finding from the survey is one that completely contradicts one of the core arguments of the bail reform movement, which is that the use of money in the bail system is one of the biggest and most concerning issues for the public in the criminal justice system. Out of all the responses we received that identified an issue (respondents could choose from 10 issues ranging from racial profiling to police misconduct to recidivism), not a single person identified the use of money bail as a criminal justice reform issue. Surprising? Not really. Below is the breakdown of issues identified:

It appears that the support that is supposedly behind the bail reform movement and public sector pretrial release is not coming from the actual public. Instead, it appears that this entire movement is being driven by advocates acting on their own behalf with little to no public support of their issue. 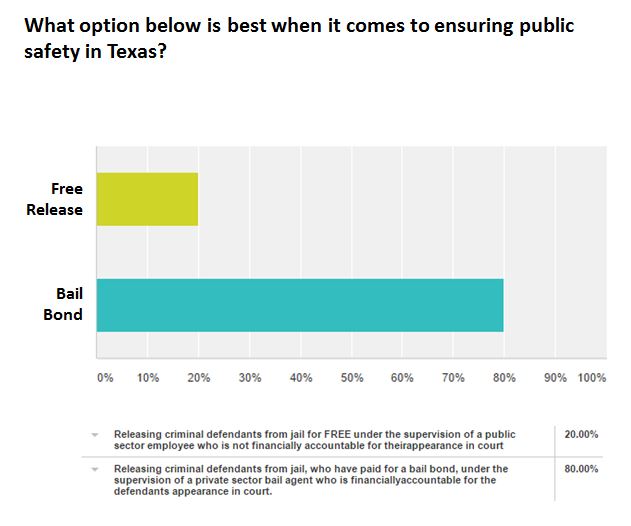 Below are some additional findings from the survey…