In another attempt to gauge the public’s opinion of the ongoing discussion around bail reform, we thought we would expand our last survey’s reach from just Texas to the entire country. In order to maintain an “apple to apple” comparison between the two surveys, we asked our national survey respondents the same questions that we did our Texas respondents a couple weeks back.

The results, exactly the same as those from the Texas survey…and that is that people are NOT in favor of the “free release” policies that are being advocated as part of the bail reform movement. The results of the first survey question alone show that the public understands and supports the importance of the concept of financially securing a defendant’s release from jail as opposed to free release through a taxpayer funded public sector pretrial release program. In fact, 89% of respondents did NOT agree with releasing defendants from jail for FREE. Additionally, when asked about the most pressing issues in the criminal justice system, the public did not see the use of “money in the bail system” as a major problem (the least selected issue with only 3%). What the public did identify as their top concerns were issues like racial discrimination (19%), police misconduct (15%), lack of alcohol and drug treatment (15%) and recidivism (14%).

Some of the other key results of the survey are outlined below: 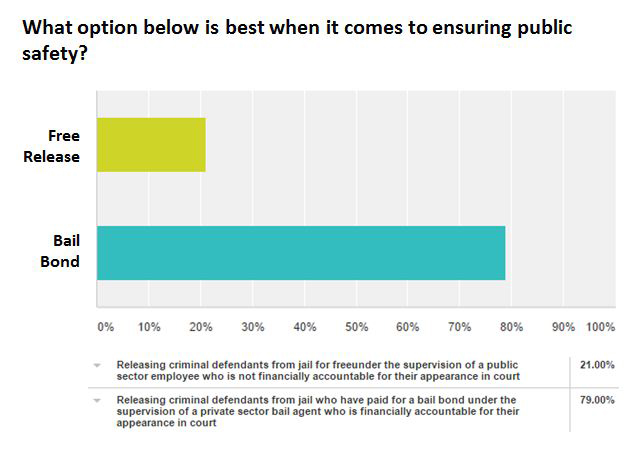 The point here is that while many agree that our criminal justice system needs some reform, the consensus of our surveys is that the reform needed has nothing to do with the “use of money in the bail system.” Over the past 6 months, we have conducted surveys in multiple states asking over 1000 respondents in total their thoughts on bail reform, and consistently the public has disagreed with the concept of free taxpayer funded bail policies proposed by those advocating for reform. Consistently these surveys have shown that the public supports and appreciates the role that bail agents play in the criminal justice system (an average of 83% support bail). It is time to put away the anti-bail rhetoric and focus on the real challenges of the criminal justice system. It is time to give judges the tools (including bail) and the discretion they need to make the most fair and informed decisions in order to protect the public and ensure justice for defendants, victims and the community.