If a group of competent statisticians wanted to create an ideal testing ground to determine how commercial bail compares to a large pretrial service agency in getting defendants to court, they could not find anything better than the Houston, Texas Pretrial Service Agency.

So, each defendant, whether on a bail bond or on an unsecured personal bond, receives the same supervisory oversight from agency staff in attempts to have all defendants make their scheduled court appearances.

A recent research project carefully analyzed the agency’s own records for the years 2006, 2007 and 2008 to determine how each method of release (secured and unsecured) performed in terms of court appearances.

The verdict is in!  Is anyone actually surprised that commercial bail wins, hands down?  Would you be surprised to know that twice as many defendants on unsecured release failed to make their court date?  That is correct: commercial bail outperforms pretrial services two to one in getting persons to court.

Fine, because now we have another source to prove our point.  In a way, it is an even better source because it comes from this pretrial service’s own records. This particular agency in Houston, Texas is one of the largest and most sophisticated in the country and still, bail works twice as well in preventing failures to appear.

Pass the word, and if you would like to receive copies of the studies, please email [email protected]. 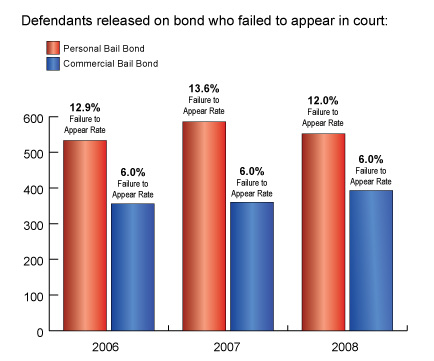