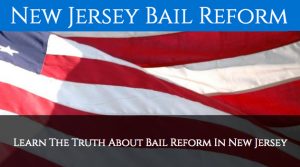 With everything going on in the bail industry across the country, now is the time to keep yourself informed. On January 1st, 2017, the entire state of New Jersey moved away from financially secured release and adopted more a D.C. style “detain” or “release for FREE” model of pretrial release. As you can probably imagine, this ill-conceived move involved very little research and understanding of what was really broken in New Jersey’s criminal justice system.

Instead of spending the time to understand who and why people were in jail, the state decided to force bail reform down the throat of all New Jersey residents. The public was completely misled during the process and the counties were left holding the bag, or shall we say “empty bag” to pay for these unnecessary, ineffective reforms.

Over the past 30 days, New Jersey bail agents have stepped up big time to pull back the curtain of bail reform lies and highlight the reforms ongoing failures. They have created a range of communications outlets to inform, educate and empower New Jersey residents to put an end to the unaccountable release of dangerous defendants into the community. Please help spread the word about what is happening in New Jersey. Share and pass on the information that the New Jersey Agents are providing on these sites. Below is a list of all the sites that contain both information and updates on the failures of New Jersey’s ill-conceived bail reform efforts.