For the past 4-5 years Rob Bonta has been one of the loudest voices for Bail Reform in California. In fact, he hasn’t only been a loud voice for bail reform, he has been a champion for criminals all over the state. He has travelled the state speaking at Law Schools, ACLU events, donor cocktail parties, and pretty much anywhere and everywhere he can find someone to listen to him, touting how cruel and unfair the bail system is. At the same time, he has supported bills to decriminalize a long list of felony crimes and release as many criminals out of jail as possible, all while co-authoring Zero Bail bills to prevent most criminals from ever spending a single night in jail.

He also stood proudly behind the election of progressive DA’s Chesa Boudin and George Gascon. Two prosecutors who have made it their mission to unravel and destroy California’s criminal justice system and eliminate all forms of criminal accountability. The result is really not shocking? Crime, crime, and more crime. And I am not talking about the crime you see on the evening news; I am talking about the crime that is being committed right in front of you and in your communities. Crime you are experiencing firsthand. California is falling and it is falling fast, and Rob Bonta is standing at the top of the abyss claiming victory. And now he wants another term as the state’s top law enforcement officer to finish the job of dismantling our system and destroying public safety in our communities. I say NO. 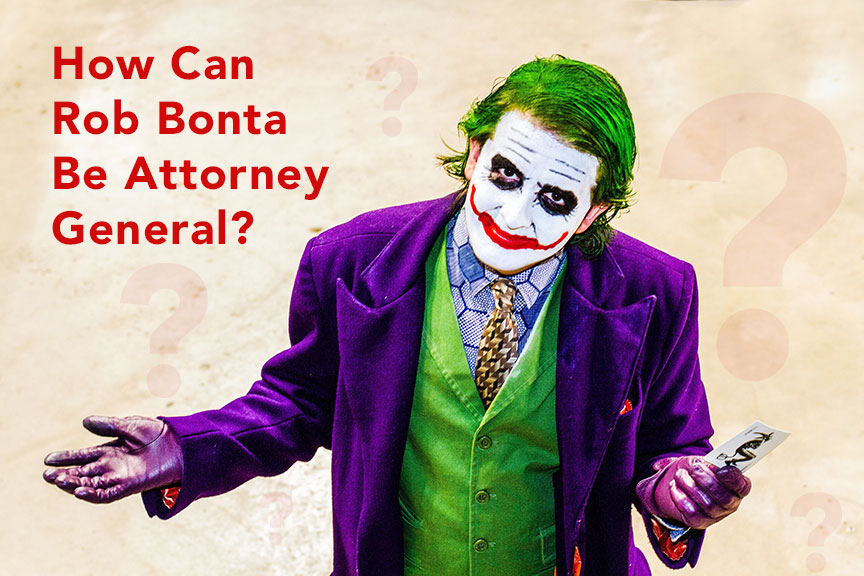 The last thing California needs right now is another 4 years of soft on crime policies and pure myopic ideological leadership from Rob Bonta. I know that…you know that…and now Rob Bonta is starting to figure it out. Earlier this week, AG Bonta stood in front of the cameras like Gotham’s Commissioner Gordon himself, and preached to all of Californians, or at least the dozens of people paying attention, how tough on crime he is. He announced the bust of a large criminal retail theft ring where he was filing 27 felony charges. In other words, Bonta was saving the day. But just as in Gotham, the good guys aren’t always the good guys, and the bad guys lurk everywhere. While Bonta was spiking the football and straining his arm patting himself on the back, several of the individuals arrested as part of this retail theft ring were already out on the street on “zero bail” (you know, that uber soft on crime policy that releases criminals from jail for FREE, and that Bonta fully supports). So, while Bonta is on stage acting like commissioner Gordon, he is really just the Joker releasing the bad guys out the back door. Is this really the guy we want in charge of upholding our laws and keeping us safe? I say NO!

A career prosecutor and tough on crime independent, Anne Marie will stand up and protect the citizens of California. She will not coddle criminals in the name of fairness and equity, but rather make sure victims of crime are protected and have their day in court. And she will not release dangerous repeat offenders into our streets with zero accountability. She will be tough, she will be fair, she will be accountable. California needs Anne Marie Schubert to return our communities back to being the safe places they once were. For this I vote YES.