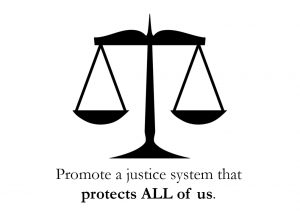 I was speaking with a good friend last week on the phone and, as usual, our conversation turned to bail reform. It is sad that happens, but when you are in my line of work, inevitably all conversations seem to go there. Now this friend of mine is someone who most would consider kind of an expert in the bail industry. He has seen everything there is to see and experienced everything there is to experience in bail, and it is always great speaking with him.

As we talked, this friend said something to me that really resonated. It was one of those “aha” moments that we occasionally have in life. He said, “Eric…I don’t know about you, but it seems to me that these bail reformers have turned our criminal justice system upside down.” I asked, “How do you mean?” He said, “Well…it seems like they believe that our system should only be designed to care about the rights, liberties and freedoms of just one person…the accused.” It was that statement that really turned the lightbulb on in my head. Just like that, my colleague had summed up a huge flaw in the criminal justice reform effort in a single statement. It was very simple, but extremely profound.

Our criminal justice system is supposed to be a system that brings together “all parties” in a non-biased, fair way to resolve disputes, and “all parties” in this context are defined as exactly that…ALL parties. It includes, the accused, the victim, the public, law enforcement, advocacy groups, the judiciary and so on. Why is this? Because ALL parties are important. All parties have a right to justice. And all parties are protected by the Constitution. Our justice system absolutely must always consider the rights of the accused. But at the same time, it must not forget about the rights of the crime victim. It must not ignore the rights of the public.

All of these questions are extremely important to not just protect the rights of the accused, but also just as important, protect the rights of every other deserving party. Showing up for court is actually a bigger deal than most bail reform advocates realize. If the defendant shows up, the scales of justice remain in balance. Each and every party is present and has a chance at justice. If the defendant doesn’t show up, the scales fall out of balance and none of the parties get a chance at justice. In fact, when the defendant doesn’t show for court, the victim actually gets revictimized making the situation even more out of balance.

Whether you like the bail industry or not, or whether you like bail agents or not, is irrelevant in this debate. What is relevant is the mechanism by which bail operates with the system to ensure the careful balance of rights, liberties and freedoms amongst all parties in the justice system.

Bail reform advocates might not like the so called, “money bail” system, but every bit of evidence shows it works and has worked for a very long time. Bail reform advocates might not think “money bail” is fair, but in reality, it is the fairest thing possible when it comes to protecting the rights, liberties and freedoms of ALL parties…not just the accused.

To simply focus on just the accused and how much money that person has, or does not have, completely violates the rights the other parties. To simply conduct a risk assessment that asks questions focused on just on the accused, completely violates the rights of the other parties. To simply say that someone is innocent until proven guilty and ignore the fact that they are accused of a crime based on probable cause, completely violates the rights of the other parties. We need to stop thinking about a “criminal” justice system, and rather promote a “justice system” that protects ALL of us…not just the people committing the crimes. If we can do that, then we can truly achieve a system that is focused on delivering justice for ALL and not just justice for one.