AGENTS HONORED FOR 15 YEARS OF SERVICE
By Sue Doyle 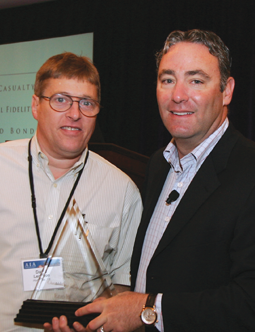 He’s been in the bail bond business for 24 years, but lately David Lemmon’s been feeling like the new kid on the block.

After opening a new office in Conroe, Texas, Lemmon’s days are now spent introducing himself around a new courthouse and forging relationships with its lawyers, jailers and judges.

It may be a new stomping ground, but to Lemmon it also has a familiar beat. It reminds him of his early days on the job after first opening for business in Huntsville and the work that went into building ties with the criminal justice community there.

“You don’t realize the depth of relationships that you have between them all,” said Lemmon. “And when you go to a new town and don’t know anyone in court or in jail, you wonder what you had to do to make the other office successful.”

Allegheny Casualty, International Fidelity and Associated Bond (known as AIA) recognized Lemmon and 26 other agents with loyalty awards at the Southern Midwest Region Agents conference for 15 years or more of continued service with AIA’s family of companies.

The three-day conference in Dallas, Texas included four 75-minute workshops that empowered agents with information about business planning, getting an edge on competition, working more efficiently with computers and ensuring their financial well being. “It’s my belief that for all things successful – it’s all about relationships,” said Brian Nairin, AIA President and CEO, addressing the crowd of over 200 agents. “If you treat people in your business, life and work with dignity, you will have a successful business.”

The conference and its details about building a solid business hit home for Lemmon as he thought of his new office. Aside from the new lessons learned, he found the old ones rehashed there as a good refresher course for day-to-day business. He has worked with AIA for 15 years.

Before his days in the bail bonds industry, Lemmon ran a successful insurance company. But one day, a colleague working in bail bonds visited and suggested he change over to the bail industry where he’d make a better living.

For two years, Lemmon thought about it, eventually selling the insurance company and taking the plunge. 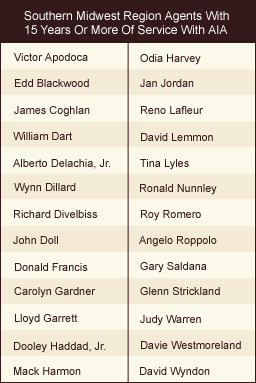 He has never looked back.

The work has served Lemmon well for many years and now his son Christopher, 19, aims to follow his footsteps and get into the bond business.

To stay upbeat and inspired, Lemmon plays motivational tapes in his car. A firm believer in positive thinking, Lemmon said that if you do good things and help people, good things will happen to you. So when the bad days do come, he tells himself that they will pass, and he shifts his focus to the uplifting facets of his life, such as his family and his job.

Propping his feet on a footstool, Lemmon’s orange alligator skin cowboy boots stick out from under his cuffs. The shoes were a gift from grateful clients. In fact, he has received five pairs. Getting presents is an unexpected perk of the job, he said.

It happens because the nature of an agent’s work can draw out strong emotions from families and friends seeking help to get their loved ones back home.

As many agents like Lemmon quickly learn, relatives and friends of the incarcerated enter a bail bonds office in tears. Confused by the court process, they don’t always know how to make sense of it all. Some are terrified. And they turn to the bondsmen for help through the ordeal. It can be the start of a long relationship.