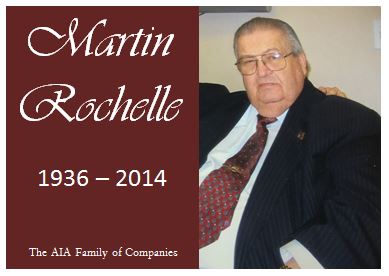 The entire team at AIA is deeply saddened to report the passing of longtime friend and agent Martin Rochelle (1936-2014).  Mr. Rochelle was truly one of the special leaders and unique gentleman in the bail bond industry and will be sorely missed by all.  He is survived by his wife and three children.  Funeral services are scheduled for tomorrow at Riverside Memorial Chapel, 21 West Broad Street, Mt. Vernon, New York 10552.  For more information please call 914.664.6800.

Below is his obituary from this morning’s Yonkers Tribune as well as a link.

Martin Rochelle lived an accomplished life with integrity, ethically driven, and compassionate in his demeanor. His drive and fervor could not be exceeded no matter how far or wide the search for another. He succumbed to arduous and painful medical issues against which he struggled with all his being. Valiantly fought, he was overwhelmed. The tenets that sated and maintained him his entire life was greater than his resume of accomplishment over his 78 years among us.

He will be remembered for his love for Yonkers, his belief in its people, his empathic abilities, the acumen of acquired knowledge and experience he brought to the table. He was astute in many disciplines, standing his ground on issues he would constantly reassess. He was tough, but he listened, and more so, he heard all those with whom he engaged and encountered.

He was loved and respected by all who came to know him. He embodied a cantankerous façade but was neither a curmudgeon or cantankerous. He was no pushover. He stood for reason, and goodness, and kindness, and introspective thought and action.

He lived the life of a “mensch”, an understanding, worthy, honorable man who lived a life of rectitude, piousness, and dignity – attributes few attain. Martin Rochelle did.

Martin Rochelle passed away this Sunday morning, November 23, 2014 at White Plains Hospital among his loving and caring family. He is survived by his wife and children.

Martin Rochelle’s life as an adult is exemplary. He joined the Unites States Air Force, created the largest network of bail bond companies, served as Yonkers City Manager before the advent of a city mayor, also as Chairman of the Yonkers Parks, Recreation and Conservation Department, and the Westchester County Parks Recreation and Conservation Board, as President of the New York State Recreation and Parks Society Board Commissioners, as City Marshall to the Yonkers City Court, Commissioner of the 9th Judicial Independent Screening Commission, and host of a weekly Tuesday evening radio show heard on WVOX-1460 AM.