If you ask anyone you pass on the street in Los Angeles and ask them what the number one issue California is facing, they will say crime. If you ask anyone on the street in New York what is the number one issue facing New Yorkers, they will say crime. In fact, if you walk around in any large metropolitan city in this country from Seattle to San Francisco to Houston to Albuquerque, you will get the exact same answer, CRIME! 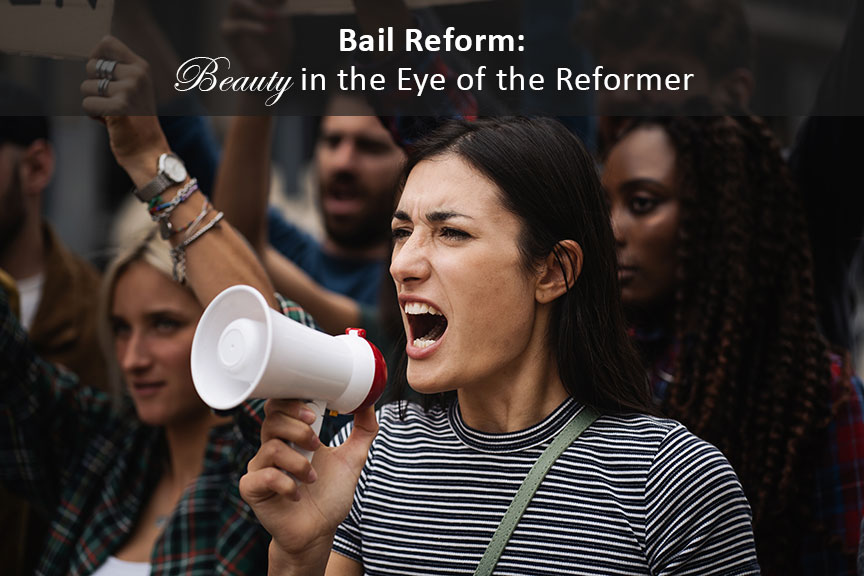 Why you ask? Over the past decade, the leading mantra of the progressive left has been “Bail Reform.” They have screamed it from the streets, they have screamed it from the rooftops, they have screamed it from the floor of the state house, they have screamed it from behind the podium at your local county supervisors meeting. There isn’t a place they haven’t spread their attractive narrative of inequity and unfairness. And the media has only helped their cause. Story after story about the evil greedy bail bondsmen and the damage they do to the poor and communities of color. And sadly, the narrative worked. Bail reform was taken up by state legislators all over the country. From red states to blue states, legislators heard the roar of the angry mob and responded. States increased the number of defendants they released for free. They lowered penalties for long lists of crimes and decriminalized drug crimes and felonies down to simple harmless misdemeanors. Shoplifting became no longer a crime in many states and instead just became a nuisance to the shop owner. And at the far end of the spectrum, a couple of states even went as far as eliminating most bail altogether, New Jersey and New Mexico.

What we have witnessed over the past decade, has been one of the biggest con jobs in the history of our country. We have seen our jails emptied, our laws ignored, and criminal activity go unpunished. The result has been increases in crime across the board and across the country. Every bail reform policy pushed on a community has ended in chaos and complete failure. Where are the safer streets we were all promised? Where are the safer schools and better communities, they told us would result from these radical soft on crime policies? We were all sold a bunch of lies and propaganda, and people must be held accountable for what they have done to our communities.

With all these things unfolding before our eyes, and all the data being released on increasing crime across the country, the amazing thing is that not a single person the promoted bail reform will admit that it was a bad idea. In fact, most proponents of dismantling our criminal justice system still feel like we haven’t gone far enough. Which by the way has been their modus operandi, for the past 50 years? Step one, identify a problem that doesn’t exist. Step two, throw a bunch of taxpayer money at it. Step three watch your program fail miserably. Step four, ignore the failure and say that the program was working. Step five, blame your opponents for undermining your success or blame them for not giving you enough resources and funding to make it successful.

Take a look at Harris County Texas. A perfect example of what I have described above. Bail reform activists used the federal court system to dismantle the third largest criminal justice system in the country. Using their standard misinformation and propaganda, they were able to mostly eliminate bail and create the largest system of FREE unaccountable pretrial release in the country. And now? Harris County’s criminal justice system is in shambles. After spending $100 million to make the system fairer and more equitable, they have instead created one of the most inefficient and ineffective criminal justice systems in the country. No one, and I say, no one shows up for court anymore. Why, because they don’t have to or even worse, don’t want to. How is that more fair and more equitable? Violent crime is skyrocketing, and communities are in chaos. And what do the proponents of bail reform say? Bail reform was a complete and total SUCCESS. They say the jails are less full, so it achieved its objective. They say Harris County is safer because less people are locked up in jail. Really? Safer? Tell that to the family that just had their car broken into or the shop owner that had to close his store because he couldn’t stop people from shoplifting. It baffles the mind to try and understand how this can be success.

The best part of all this is that now, Harris County officials that pushed bail reform on the county are not only claiming the success of the program, but they are also blaming the bail bondsmen for the increase in crime. The say that the bondsmen are letting people out of jail for too little money. I’ll say that again, the bondsmen are letting people out of jail for too little money. Wasn’t only a couple years ago that bail reform proponents were taking the stand in federal court testifying that the bail industry was keeping people locked up in jail because they couldn’t afford to pay for a bail bond? So, the solution was to let everyone out for free. And now, those same people are saying that the bail bondsmen are charging too little and letting too many people out of jail. The argument is almost too ridiculous to make out loud, but that doesn’t stop the proponents of bail reform. They will say and do anything to push their policies on the rest of us, even when they fail. In response to these ridiculous claims, Harris County is responding exactly like they did before, they are falling for the lies and misinformation being spread by these activists hook, line, and sinker. Their response isn’t to rethink their policy, rather it is to further regulate the bonding community and force them to charge their customers more to get out of jail instead of less. Pretty unbelievable.

Just when you think there is no hope, there is. This past week New York pulled back a large part of its bail reform. Other states are starting to question it as well. This is great news. If we are ever going to fix the problem created by these ineffective and dangerous policies, there needs to be an intervention of sorts. The public needs to be informed. They need to wake up to the false promises and lies being sold to them. They then need to demand justice for their communities. They need to demand public safety for their families. Our industry must get the word out about the truth. We must scream from the same mountain tops as the activists.  We must shatter their false promises with the hard truth about what is happening outside in the real world. Fairness in our criminal justice system is not a one-sided concept reserved for criminals. It is supposed to be a balanced scale that is supposed to apply fairness to all sides in the most efficient way possible. So, let’s stop supporting the out-of-control activism and angry mobs. Let’s stop the blame and denial. Instead, let’s try to fix this broken system and make our communities safe again.